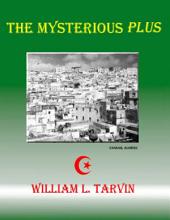 The Mysterious Plus opens with a situation recently in the news: the murder of an American embassy official in a North African country. The aim of the novel, however, is broader than an individual act of violence. Its murder becomes a symbol of the fanatic-inflamed divisions between Muslim Middle East and Judeo-Christian West, which are fraying the ties that bond humanity. The hero of The Mysterious Plus straddles both worlds. To save his sister, Omar Naaman, nineteen, betrayed comrades and country during Algeria’s fight for independence from colonial rule. At the war’s end, the defeated French, grateful for his double-dealing service, whisked him to France, bestowing a new identity, Remy Montpellier. Years later, Remy is coerced by the French DGSE (their intelligence service) to return incognito to Algeria, where as Omar he is still branded as a traitor, in fact, as the last of the “Seven Devils,” the first six “great collaborators” having been tracked down and killed by Algerian agents. Sent to investigate the gay-bashing murder of an American embassy attaché, who (DGSE suspected) was trafficking classified documents, Remy gradually moves from pursuer to pursued. Will he fulfill the true purpose of his returning to Algiers, or will his treasonous past overtake him? How does the “Mysterious Plus” control the answers to these two questions and hence the resolution to the novel? In his previous book, The Saint of Sodomy (GLB, 1999), William Tarvin, who lived in the Middle East for two decades, satirized Muslim sexual hypocrisies. Though the same barbed wit infuses The Mysterious Plus, it is counterpoised by a darker strain, that materialistic/spiritual differences between West and Middle East threaten to sever the cords bonding humanity. Addendum: Since the novel incorporates ideas from around one thousand philosophical, religious, literary, social, psychological, historical, and political works, Tarvin has provided some commentary and definitions in end-of-chapter footnotes.